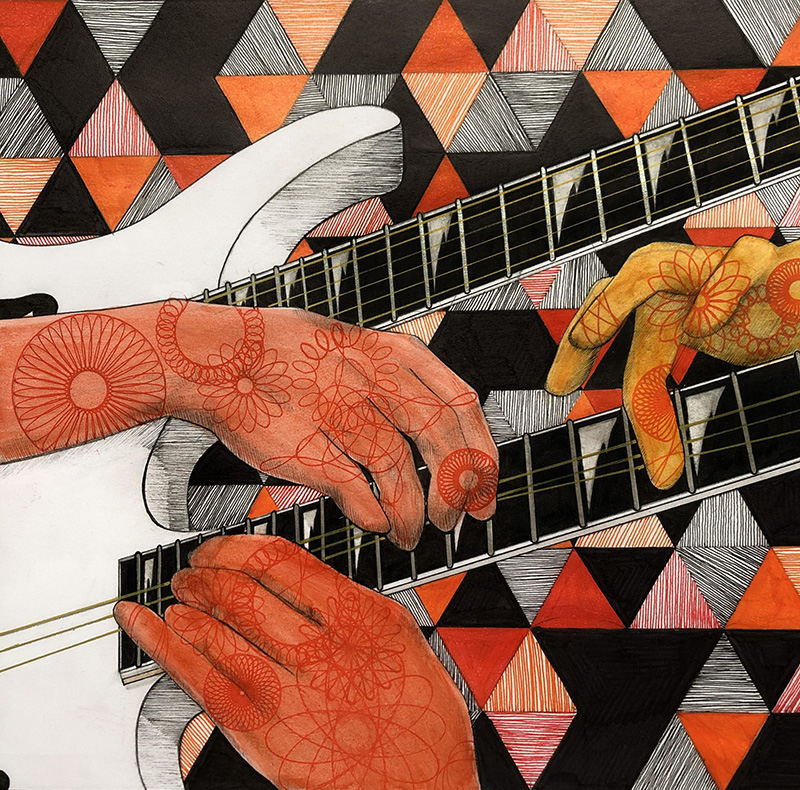 Generosity is probably what Paul Gilbert had in mind when he recorded Get Out Of My Yard. His first instrumental creation, from sunny Los Angeles. The album provides plentiful evidence of his technical knowledge as well as his neoclassical influence. If you’re a fan of Racer X and Mr. Big, you’ll certainly find this suited to your taste. But there is much more to find in this album, which is now a milestone in the genre.

GET OUT OF MY YARD – THE OPENING TRACK

First things first, in the opening track, Get Out Of My Yard Paul Gilbert raised the bar so high that he commented as follows: “The first 38 seconds are impossible to play. But I played them”. Said by someone else, this may sound a tad overconfident, but when listening to the track we can feel exactly what he meant.

He had the inspiration to play a double neck guitar which he put only three E strings corresponding to three octaves on the lower neck.

But there’s more in the form of a human capo, shifting along the fretboard allowing Paul to play comfortably play faster.

No drums, no other instruments. The only addition is a Boss DD6 digital delay at the very beginning to achieve that “space age” sound. Let’s just say he showed us that he knows how to make an entrance.

Hurry Up the second track is clearly a tribute to Rush. A straightforward song built on a progressive riff, throwing you right back into the 70s. Curse Of Castle Dragon is another highlight of the album. Even the most distracted listener can clearly taste a bit of Racer-X, with the brilliantly worked out unison of battery and guitar. It is also worth mentioning the happy marriage between bass guitar and drums in this standout track. In contrast with Get Out Of My Yard, the album at this point becomes a lot quieter.

Radiator is very bluesy from the very beginning. Although for some this can be a predictable construction, it proved that Paul Gilbert is much more than just a powerful shredder.

What follows is the song Straight Through the Telephone Pole. Today this certainly evokes a feeling of nostalgia due to the old-style groove and the vinyl-like feel.

Marine Layer is something different altogether. Forget for a moment the high-speed shredding we are used to with Paul Gilbert. This is pure melody, performed with nothing more than his acoustic guitar and his wife Emi at the piano. We dare you to play it to a baby until they fall asleep. This would surely be a high-quality lullaby.

Very different again is The Echo Song which is all about…you guessed it, an echo. In other words, there’s an interlude of delay guitar effects revolving around a drum loop. With My Teeth Are A Drumset, we get a safe and ordinary series of riffs. The title reminds us of how many drummers can discover the idea for a rhythm by impulsively clenching their teeth together.

But, it’s with Haydn Symphony No.88 Finale that Paul Gilbert surprises us once again towards the end of his album. This is not just a great display of dexterity with eighth and sixteenth arpeggios, but also an elegant demonstration of Mr Gilbert as a complete musician. In only 4 days, he translated all the orchestral scores to his guitar. From flutes to cellos, which is not ordinary stuff! The final song, You Kids is a safe and pleasant closing track.

GET OUT OF MY YARD – THE VERDICT

All in all, this is one of the best Paul Gilbert’s records, despite the fact he never stopped evolving and growing musically afterwards.

In this album, there are leading elements and true spearheads of innovation, such as Get Out Of My Yard and Haydn Symphony No.88 Finale, although this constant experimentation gave us some less celebrated tracks as well.

Another remarkable aspect is the balance between accuracy and perfect picking technique, while still delivering a comfortable and intimate sound which almost feels like a jamming session.

Are you looking for more? Check out the DVD review!